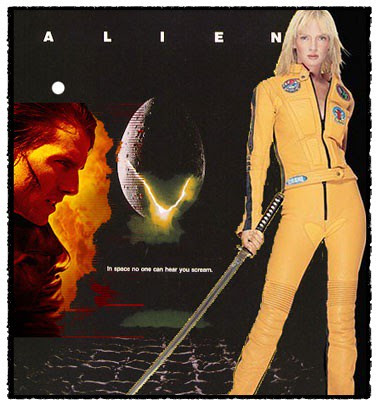 Tonight was one of those interesting moments in television channel scheduling. I didn't get home until quite late and flicked on the box. Then I spotted that ITV was running Mission Impossible 2 and concurrently Sky was showing Kill Bill 2. And over on another channel was Alien. Nothing for it but to regain the missing hours of the early evening by watching all three at once.

Now I've seen them all before so a real-time edit isn't too difficult, keeping up with the plotlines and channel hopping between the 'alien popout' and our heroine kicking her way out of a coffin, whilst still being able to see the elaborate choreography of the motor cycles ridden by Tom.